He arrived in Glasgow with just three hundred euros in his pocket, given to him by his mother-in-law. Soon afterward, his wife joined him in the British Isles. They believe the level of dentistry in Slovakia is excellent now, but it still lacks the human approach towards patients and the knowledge that it takes a good dentist to create a wonderful smile. And when they returned to the country of their birth, they decided to do something about it. ArtDentistic’s Libor Michna and Valéria Michnová at the Bratislava clinic.

This was the career these reputable dentists were destined to pursue.  Libor had already decided when he was a child to become a dentist while Valéria comes from a family of doctors. It was while they were studying dentistry in university that they met and became acquainted with each other, forming a team that eventually grew into a marriage and now a business partnership. After they graduated from medical school, they went to Scotland to acquire practical experience. “I was the first “swallow” in our young family to test the waters in Glasgow. My mother-in-law had lent me three hundred euros, but the rent for the place where we lived was alone 700 pounds. I was all but ready to turn around and head home,” is how Dr. Michna describes his start abroad. “That was in 2005 when there was an acute shortage of dentists on the islands, but in the end I stayed put and soon afterward my wife arrived with our first child. It was here where we started practicing dentistry after passing rigorous exams and it was eight years later before we came back to Slovakia.”

It’s not so bad

The husband and wife believe that an ordinary person would have not noticed any progress in Slovakia’s health system, Compared to more advanced systems elsewhere in Europe, it lacks the culture and “human touch” in relationships with patients. “As far as I can generalize, patients here in Slovakia are generally lucky because the care they receive here is at a very high level,” is how Dr. Michnová describes the system. “The problem Slovakia has is the cold, impersonal approach we never saw in Glasgow, while on the other hand in the United Kingdom there are a number of top dental offices.” Her husband added, “This approach we’d like to replicate here.”

The patient is King

Patients see dentists in the UK and Scotland as individuals seeking to provide a special service. “It’s important to realize that they’ve decided to come to you, they trust you to help them and so these patients deserve the best - 100% results and the human touch.”  This was the most useful lesson Dr. Michna learned in Glasgow, inspiring him to bring the same attitude toward patients at ArtDentistic in Bratislava. “No patient is an inconvenience to us and every one of them should be treated with respect and honor. Our main mission is to help and heal.”

However, this enlightened attitude toward dental hygiene and prevention in Slovakia is generally absent in Slovakia, something fundamentally different than what can be found in dental clinics abroad. “Both of us have studied in the United States, where people are encouraged from a young age to take care of their teeth. Most people here will only seek out a dentist when they have a pain in their teeth and need to solve an acute problem.” The couple point out, “Few ever think about prevention.”

Returning to the unknown

Education is the key to success for the Michna couple. However, it was family ties and the bonds they still had with Slovakia which brought them back home to Bratislava after eight years gone, leaving everything behind in Scotland. They sold their house, left their friends and put behind them the many years they had spent in Glasgow. But hardest of all was to say farewell to the patients they had treated over the years. “Arriving back in Slovakia was for us quite a culture shock.” Dr. Valéria Michnová describes the return home: “There were no regrets about deciding to come back. Both of us love Slovakia, but putting together a business in our native country was full of problems. There was especially the bureaucracy and the fact that we were starting from scratch. All we had was our know-how. Both of us knew the only way to go was to open our own private practice, so we right away established our own clinic.”

Everything that matters to these renowned, reputable dentists and how they run their dental clinic is the proactive approach they take toward their patients and the “human touch”. Equally important to them is cutting-edge techniques and putting innovative methods into practice. For example, Dr. Michna specializes in implantology, “To have a patient feel comfortable in the waiting room and not be shaking with fear is no small feat.” Dr. Michnová adds, “Nonetheless, it’s also important for patients not to be frightened or to feel pain either in the office or in the dentist's chair. Only for them to feel satisfied and to come back again.” 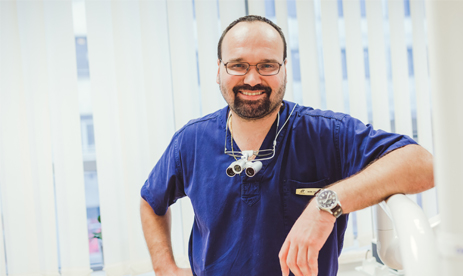